PG&E bought trees that were cleared under a right-of-way exemption, rather than a timber harvest plan, then sold them to Mendocino and Humboldt Redwood Company.

May 13, 2022 — PG&E has been removing trees and other vegetation from around its transmission line that runs alongside Highway 20 between Willits and Fort Bragg, including 115 acres of land belonging to the Jackson Demonstration State Forest, which is managed by CalFire. The work began last summer, and is about halfway done.

CalFire sold a little over a million board feet of merchantable redwood and mixed conifer logs to PG&E, which then sold the logs to Mendocino and Humboldt Redwood Company, in a contract that was approved by the California Public Utilities Commission.

Walter Smith is a landowner in Willits who has objected vigorously to PG&E’s plans to cut down trees on his property. “I think it’s a double standard,” he said, of the fact that PG&E does not buy most of the trees that it removes from most landowner’s private property. “On the other hand, would it create more of an incentive to cut more trees if landowners were being paid for them?”

Deanna Contreras, with PG&E, said the utility is paying a stumpage fee to JDSF, which the company does occasionally when removing trees from large parcels of public lands where it is possible to harvest the trees in a way that is acceptable to sawmills. She said “CalFire, as the owner of the property, submitted a public utility right-of-way exemption to support PG&E’s work.” CalFire is the agency that approves exemptions and is responsible for implementing the Forest Practice Act, which regulates timber operations.

Kevin Conway, the manager of CalFire’s demonstration state forest program, agrees with PG&E that clearing the lines is not a timber operation. “Instead of a timber harvesting plan, we used a public utility right-of-way exemption, which is an exemption in the Forest Practice Rules that recognizes that there are certain areas of the forest where the primary purpose is not the growing of forest for various benefits, but is for another use,” he said, “In this case it is for the safety of the transmission lines that are going across the forest. Some of the differences that we have within that, from our primary timber harvesting plan, is that we are only removing trees that are identified as danger trees, so those that have the potential to strike the lines. We also have worked into our contract additional fuel reduction for PG&E to perform that is outside of their corridor right-of-way. Many people that have been driving along Highway 20 have probably seen that the fuel reduction stretches into the adjacent forest, and that was very important for CalFire to make sure that we’re not only protecting that narrow PG&E right of way, but that we’re extending that protection a little bit wider to help us from having any fires that start in there extend out into the forest.”

John Andersen, the Director of Forest Policy for Mendocino and Humboldt Redwood Company, said his firm was the successful bidder on the JDSF logs felled by PG&E last year. About 600,000 board feet have been delivered so far. He is expecting another 800,000 board feet by the time the work is done this year. Some of the wood is going to the mill in Ukiah, which can take a log up to 28 inches in diameter. Larger logs are destined for the mill in Scotia, in Humboldt County.

Conway says the lumber sale makes sense for JDSF. “By structuring it as a timber sale,” he said, “normally when PG&E removes the trees, they fall the trees for the benefit to the lines, but as the landowner, the State of California, CalFire and JDSF, owns the logs still. So it would be our responsibility to remove those and merchandise them and retain any value associated with them. By packaging this up as a larger project that goes across the lines from JDSF, we were able to have PG&E actually assume responsibility for merchandising those logs that were being removed for the safety and reliability of their transmission lines, and return some of that value to Jackson. We expect this to generate about $140,000 in revenue to CalFire, and that is in addition to the benefit being provided by the fuel reduction work being done by PG&E, both within their corridor and within that expanded area that we’ve asked them to do…it’s a relatively small scale by JDSF standards, a little over a million board feet of timber that’s being removed, about half of that being redwood, and the other half being Douglas fir, Grand fir, hemlock, some of the other miscellaneous conifers.”

Contreras said the stumpage fee arrangements are very rare, though some landowners with large parcels and trees that can be sold to sawmills could request a similar arrangement. She wrote that “Any funds PG&E receives from the sawmills in exchange for the wood will be used to partially offset PG&E’s Stumpage Fee payments and PG&E’s costs of performing the vegetation management work there, which will far exceed any payment PG&E receives for the wood it delivers to the sawmills.”

Smith remains skeptical. He says cutting in the mixed canopy forest won’t solve the problem of PG&E’s regular catastrophic wildfires. “Getting back to the whole issue, stop cutting down all these trees that don’t need to be cut down,” he said emphatically. “That’s problem number one. And the forest is not the problem. It’s the lines. And even some of the fires that have been started by PG&E, including the Paradise Fire, is because of poor, un-maintained equipment.” 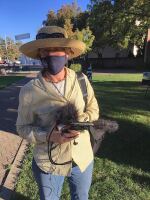